Use an Exit Agreement to Bid Farewell to Nonprofit Executives

How does a not-for-profit say “goodbye” to a departing founder or executive? A gift and farewell party usually are appropriate. Though not as much fun to plan, an exit agreement may also be called for. This legal document, usually developed by a nonprofit’s board of directors, details the terms of a leader’s departure. Here’s why exit agreements are important and how you can ensure any agreements you prepare achieve their purpose.

First, understand the difference between exit agreements and separation agreements. In general, separation agreements protect employers from former employees taking legal action (for example, with a wrongful termination suit) or directly competing against them. Exit agreements, on the other hand, usually relate to a departing employee’s compensation and continuing relationship with the employer. 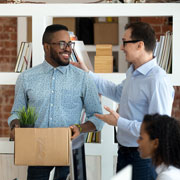 Consider these scenarios that may call for an exit agreement:

1. Catch-up agreements. When the founder of an arts organization started the group, she initially accepted only a modest salary and has for years been drastically underpaid relative to other nonprofit executives. What’s more, she has received little in the way of retirement benefits during her tenure. When she decides to leave, the nonprofit’s board will use an exit agreement to compensate her for her hard work in making the organization a success.

Generally, this is known as a “catch-up” agreement. The monetary award acknowledges that the executive’s salary has been significantly lower than it should have been for a long period or that your organization’s retirement contributions have been minimal or nonexistent.

2. “Stay” incentives. Although an executive director is eager to retire, his nonprofit’s board wants him to stay on in some capacity. The organization is gearing up for a capital campaign and, to get a good start, it needs his clout and connections. His exit agreement includes “stay” incentives for a specific time period.

Such agreements enable nonprofits to retain critical knowledge, expertise or connections. Usually incentives are provided for a limited time.

3. One-time honorarium. Although a social service charity’s executive director has only been in the position for five years and has been compensated adequately, her board wants to honor her for extraordinary service. She steered the nonprofit through several challenging periods, including the aftermath of a major natural disaster. Her board uses an exit agreement to thank her with a one-time honorarium.

Several factors will likely influence your decision to use an exit agreement and dictate its terms as well as other actions you take.

Financial resources. Usually, a nonprofit board approves exit compensation because it believes it’s “the right thing to do.” But even if your nonprofit can compensate a former employee right now, its financial position may change over time. You can ensure your organization has the financial resources to make a generous offer to your departing executive by awarding a lump-sum amount. However, if you decide to extend compensation payments over a certain period, have the agreement specify their source. It also should provide for discontinuation of payments if they jeopardize your charitable mission.

Private inurement risk. Paying a departing executive compensation could put your organization in danger of violating private inurement rules. These rules prohibit certain transfers of assets (particularly “excessive” compensation) from nonprofits to insiders or people who have significant influence over the organization. If the IRS deems such compensation unreasonable, it could impose fines and penalties on your nonprofit and on individual board members who approved the compensation package. In a worst-case scenario, your tax-exempt status could be revoked.

Stakeholders’ reception. You need to think about how your nonprofit’s stakeholders — donors, staffers, volunteers and charity watchdog groups — will react when they hear about the package you’re offering a former executive. They may feel it’s excessive or unnecessary and that the board’s actions are suspect. So always remember that the terms of your agreement will become public. For example, you’ll need to report any financial compensation on your annual Form 990. To protect against accusations that your board has acted improperly, make sure board meeting minutes record discussions about the exit agreement and justifications for the amount provided the departing employee.

Contract issues. A breach of contract is possible whenever an organization enters into a contract with another party. However, such claims brought against a not-for-profit typically are excluded under liability insurance policies. Check that you have this protection in place.

Your nonprofit may want to provide a respected leader with a lasting farewell gift. But you must minimize the risk to your nonprofit by avoiding promises you can’t keep — and by making any agreement as specific as possible. Your attorney can help you draft an effective contract. And your financial advisor can help you determine whether you have the financial wherewithal to make a generous offer.